skip to main | skip to sidebar

I believe in miracles

Posted by Nicole on Monday, March 22, 2010
We've been talking about miracles in my philosophy class--those events which so violently oppose the laws of nature we've formulated that they require some sort of supernatural explanation. Some suggest that certain laws can be violated, but only by other laws. For example, the law of gravity be superseded by aerodynamics. A more Christian question might ask whether God's grace supersedes the laws of sin and death, a deeply serious question centered around Christ's death and resurrection. I had lunch with a professor I trust deeply and asked him point blank whether he believes in miracles. "My daughter giving birth was a miracle," he responded after a moment, suggesting that perhaps miracles have been "prepared for," a thoughtful God writing their possibilities into the fabric of time and space, even if we don't understand how they fit into our physics. While that didn't entirely answer my question the way I'd posed it (as a scientific one--the framing of religious questions in scientific language is another conversation), but it did cause me more than a moment's humble pause. I struggle with the typical scientist's ego: I have studied this world enough that I can make assumptions about its behavior, and I know enough of the world's details to understand its grandeur.
*cue smack on the head*
While the definition of "miracle" is necessary (as is any definition when you want to have a thoughtful conversation about its implications), it is debated. Perhaps it requires supernatural explanation. Perhaps they don't happen (indeed, some thoughtful and God-fearing churches have the official stance that miracles were limited to the apostolic age). The mere fact that there are saliences in our world, the mere fact that sometimes things don't happen as we-in-our-wisdom would predict should be so incredibly humbling, and smacks, perhaps, of a God who still smiles when we try to amass all our knowledge and turn it into official canon of biblical proportions.

I was particularly struck by this in a sermon and a small experience I had on Sunday. Again I ventured into Boston to go to Park Street Church, this time with a group of girls from my floor. We were speaking in the car of disabilities, as one of my girls' sisters has severe dyslexia and has struggled for years with learning how to read, something I so flippantly regard as simple. Park Street Church was celebrating Enable Boston Sunday this particular day, a day to remember those in the congregation and greater Boston area who struggle with all sorts of disabilities. One woman gave a testimony, speaking of her son's head injury that has since left him with severe short-term memory loss, an inability to speak, and myriad other supposed "disabilities." Mrs. McLeod, however, spoke to her son's strange interactions with God, telling us stories of finding her son awake at 3 in the morning, praying at the side of his bed. Pastor Gordon Hugenberger then got up and spoke on Ehud, a man disabled in his right hand yet who used his right hand to slay the evil Moabite king (Judges 3 v 12-30). He then pointed out that we all suffer from a certain disability--the disability of sleep. We are all limited by this crazy one third of our lives that we spend asleep. Depriving ourselves of sleep is psychologically damaging at best, fatal at worst. He pointed out the Scripture that says:
Brothers, think of what you were when you were called. Not many of you were wise by human standards; not many were influential; not many were of noble birth. But God chose the foolish things of the world to shame the wise; God chose the weak things of the world to shame the strong. He chose the lowly things of this world and the despised things—and the things that are not—to nullify the things that are, so that no one may boast before him. It is because of him that you are in Christ Jesus, who has become for us wisdom from God—that is, our righteousness, holiness and redemption. Therefore, as it is written: “Let him who boasts boast in the Lord.”
(1 Corinthians 1:26-31)

I left the church in a weird mood. Moving forward with my group's lunch plans--a visit to an improvisational restaurant called "Fire and Ice," which lets you watch your (unlimited) choice of raw vegetables, meats, pastas, etc. and sauce be cooked by master chefs on a giant center flat grill. I was waiting for a brunch omelette to be prepared when there was a little commotion beside me. A group of disabled adults from a home in Boston had come to Fire and Ice on a field trip, and the man next to me didn't realize that you're not supposed to mix your sauce with your food before giving it to the chef. It makes the food more flavourful and easier to cook if the sauce is added to the mix toward the end, and so while the chef gently suggested that Tom (the man next to me) hold onto his sauce the next time so he could enjoy an even yummier plate, Tom just couldn't process what was being said to him, and he looked at me with the most sorrowful expression of guilt--what had he done wrong?? And so I gently and more slowly explained what I thought the chef was trying to say. Perhaps he was grateful for my kind voice, or perhaps he was just excited to talk to someone (and show off his nifty ID card:-)), but his genuine appreciation--difficult as it was for him to express in more than a huge smile--was so overwhelming that I had to go to the bathroom to cry for a few minutes.
I think humility is a miracle. I think I tend SO MUCH toward pride and arrogance that any small act of gratefulness toward me that drives me to my modest knees can't be part of the way I naturally function. In all my egoism and smugness as to how much knowledge I've accrued in my short time here, I'm still at the mercy of God, and how much he knows about what I truly care about. That he knows me so well to bless me as he wills and to show me the depths of my sin--I can think of no other word than miracle, natural or otherwise.
Another miracle: the gloriously sunny day we had on 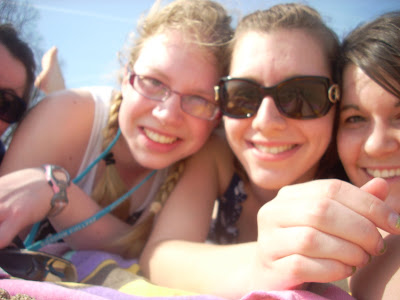 Saturday--a trip to nearby West Beach was in order. :-)

Promote Your Page Too