skip to main | skip to sidebar

how do you feel about traveling?

Posted by Nicole on Sunday, January 24, 2010
I spent four hours on Skype on Saturday, catching up with friends in places as far away as England and Illinois. It is a strange balance, learning how to be present where life has planted you and take full advantage of new opportunities while paying heed to past relationships and humbly recognizing that the past and future are inextricably linked. Apart from waxing emotional, it was truly good time learning what the lives of Gordon friends abroad entail. Speaking of which, I had lunch today with my friends Peter, Jenna and Austin who have all spent time abroad recently as part of Gordon programs. Jenna and Austin studied in Costa Rica while Peter spent time in Uganda. All had stories of how their lives had been enriched and how their senses of academic endeavor had spread so much further than mere major. It got me excited for my own adventure, which, while not as international, still promises to be an amazing experience. The Gordon Biology department as well as other Consortium of Christian Colleges and Universities (CCCU) schools sends students to the Au Sable Institute's Great Lakes campus in Mancelona, Michigan. I'll be flying out the last day of school and spending the month of May and the first part of June in Michigan taking a class called "Field Natural History," which will be an awesome study in reading fields and forests as well as general knowledge regarding reptiles, birds and other animals. My best friend Kaitlin is taking the class, too, and we're both chomping at the bit to get our galoshes on and explore the woodlands of upper Michigan. I've never been further west than Pennsylvania, so I'm really looking forward to traveling a bit more toward the middle of country. I bought my ticket this past week and am already itching to put my environmentalist skills to the test. There was plenty else to keep me busy this past week; a lecture on Tuesday on "the Philosophy of Rock and Roll" complemented a discussion in my Fine Arts class on what makes things beautiful, and discussions with friends about the image of God paired up perfectly with a discussion in Bible Study at my church on what the movie "Avatar" says about the presence of God. It's been so mindblowing to see how supposedly distinct areas of my life have found such tangible and clear intersections. I love when the things I study in one class become fodder for another; it gives my schooling such a large feel, and a good one, because I never want to stop learning, and here (and this past week) I've been especially excited by that. Keep growing wiser, friends, wherever you are... 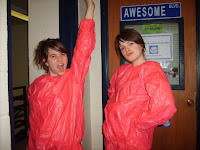 On an unrelated note, I'm waiting until it gets a little warmer so I can go running in my favorite purchase of the fall semester:

Promote Your Page Too